We spent the afternoon of our second day in Jodhpur doing the fort tour.

Mid-day was rainy; we made our way through muddy (at least, I told myself it was just mud…) streets to our favorite haunt, Café Sheesh Mahal for some caffeine and reading until things cleared up. By the time we got up the hill to the fort, the weather was perfect!

The fort at Jodhpur, Mehrangarh, was just fantastic to visit. The family of the Maharaja is still involved with its management (new generations of royalty are still crowned here), and it is by far the most slick, tasteful and well-run tourist spot I have been to in India. The only people trying to get you to part with your money are the auto rickshaw touts outside and one group of musicians within the fort who encourage you to get your picture taken with them (Roman was gracious enough to participate to my amusement 😉 ). Everywhere else you can wander around completely un-harassed and accompanied by a really well produced and informative audio guide.

Beyond the impressive production, the fort itself is simply beautiful as are the views its height affords, and with the audio guide, it provides a really interesting glimpse into Rajasthan culture and history. Here is just some of what we saw, although I feel like the pictures don’t do it justice.

View of a temple against retreating rain clouds, on the way up to Mehrangarh 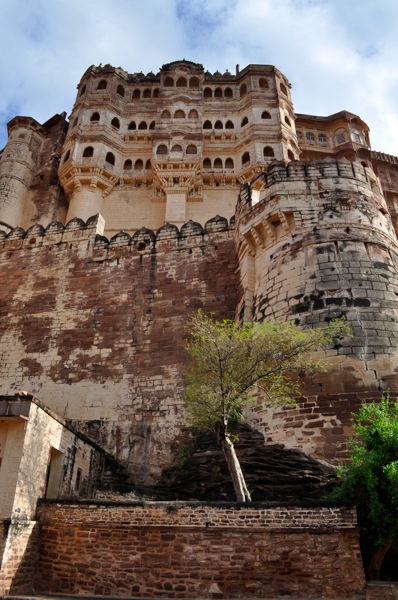 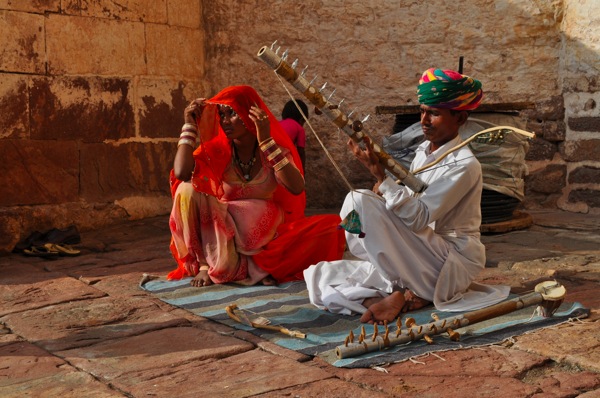 Musician playing a traditional instrument called a ravanhatta and singing. (not the one who was looking for photo ops with Roman 🙂 ). The music was beautiful! The woman next to him may be his wife – the traditional bangles she is wearing indicate she is married. She collected any money the tourists gave.

Handprints at the entrance Lohapol, or Iron Gate. They are from the hands of the wives of Maharaja Man Singh, made before they committed ritual suicide on his funeral pyre in 1843.

The intricately carved windows of the fort palace are designed to keep the desert sun at bay, letting in breezes but not heat, and to preserve the modesty of the women living inside – they allow inhabitants to look out while remaining unseen from the outside. Apparently each set of window carvings in the palace is unique! 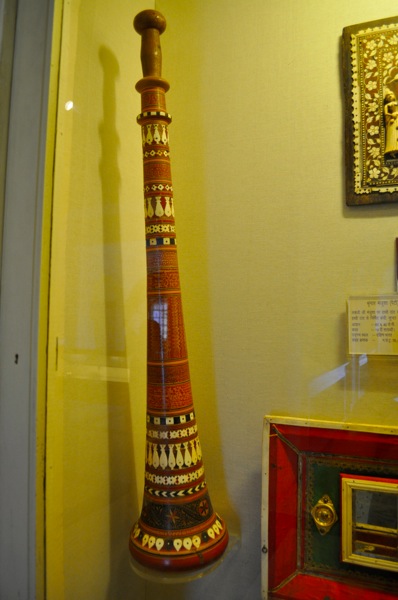 Ladies’ dumbbell for working those biceps and triceps!

The museum had an impressive array of intricately decorated weaponry. This is the carved ivory handle of a dagger. 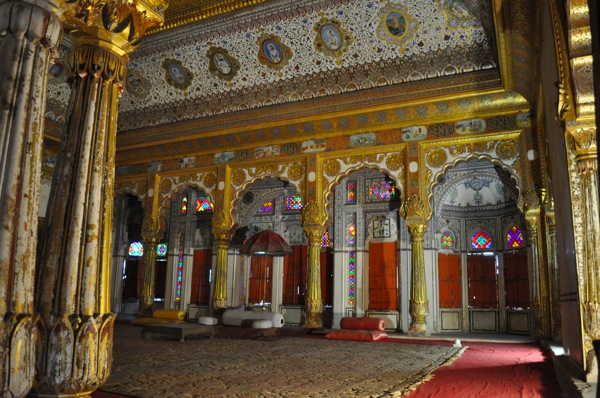 The Maharaja’s poetry and music room 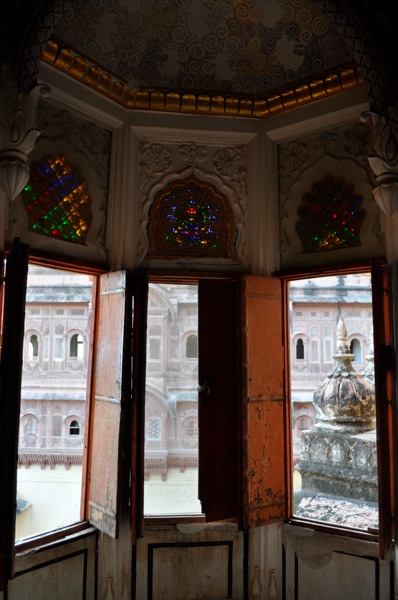 Stained glass above windows opening to one of the many courtyards

One view from within the palace

Pigeon perched in front of a carved peacock

One last sunset view of the blue city from the fort

A super cute wee puppy searching for scraps outside the fort. There are stray dogs everywhere in India, most in varying states of too skinny and less-than-healthy… I wish I could carry dog biscuits around with me, especially when we run into puppies (although this one is relatively healthy looking…)