Flying into Myanmar from Thailand was magical. As I mentioned earlier, I knew next to nothing about the place, and with the little information that I did have, my imagination could run wild.

I felt we were alighting in a land forgotten by time, tropical, mysterious and unknown, conflicted but yet somehow unspoiled, rife with untold, shadowy cultural riches.

We had a late afternoon flight. The landscape scrolling beneath the plane was a rich green: broad sweeps of flat lands covered in countless rice paddies and other farm lands, punctuated only occasionally by low buildings or, more spectacularly, by the spires of gold-painted Buddhist pagodas, aflame in the last sun rays of the day.

The plane landed just as the sun was beginning to melt into the tree-lined horizon. Time after time during our stay there I would have the same realization – the sun is just bigger in Myanmar than in other countries I’ve been to in this world. I couldn’t stop watching it as the plane taxied on the runway. I tried to capture it with my iPhone – this image does nothing to convey how huge it seemed but here it is anyway. 🙂 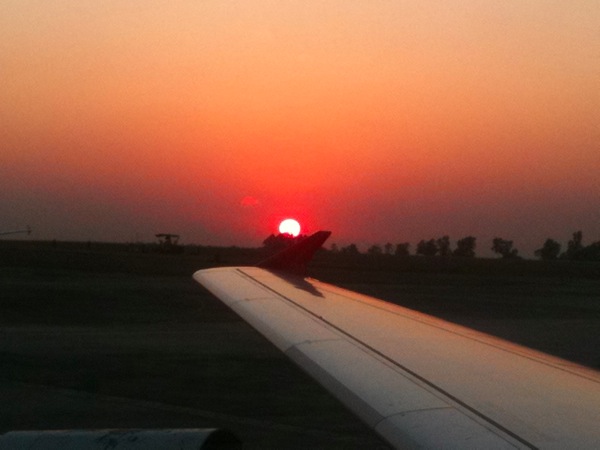 The setting sun above the plane’s wing

After waiting in massive lines in the bustling and huge Bangkok airport, Yangon International was small, simple and above all peaceful by comparison. The airport staff was dressed in drab brown uniforms; women in unflattering skirts and tired socks pooling around their ankles. There was definitely a feeling of depressing government influence in the attire, but everyone we dealt with was cordial and quiet – the vibe was surprisingly tranquil.

We got a taxi from the airport to our hotel – a battered Nissan Bluebird, a model I’d never heard of before. Taxis in Myanmar are pretty impressive. New cars and proper replacement parts must be really hard to come by. We did see some modern, western-style cars in the former capital, but most people and certainly no taxi driver can afford them. Every taxi we took during our stay was a well-loved but totally dilapidated rust bucket with exposed inner workings and improvised upholstery held together by scraps of metal, duct tape and hope. I really got a kick out of them! 🙂

A taste of home

There was another aspect of driving in Myanmar that I enjoyed. Thailand certainly felt more western after India. Myanmar was definitely a whole different flavor, but there were a few little things that were distinctly reminiscent of home – and specifically the States.

This was the first country we’ve been to in Asia where they drive on the right hand side of the road. What’s cool though is that they take what ever cars they can get – the driver’s seats seemed to be on the right side of the car as often as on the left. 🙂

It’s a small thing, but I also noticed American Standard brand toilets and sinks everywhere we went – a brand that I haven’t seen anywhere else but in America. Someone must have secured a good deal with the Burmese government…

The other thing that I hadn’t seen in ages and ages but was a huge part of our trip was the US currency. The Burmese currency, the kyat (pronounced chat) is so unstable, that tourists have to pay for larger purchases (hotels, transportation, etc) with dollars. It was funny to see those distinct and familiar bills again after such a long time. 🙂 Apparently there are issues with forgery; people will only accept spotless, creaseless bills of a certain age – there are even some serial numbers that get rejected. There are no international banks or ATM machines anywhere in Myanmar (apparently the local banks still operate with manual book-keeping – nothing is computerized) and only a handful of places in the entire country are equipped to accept credit cards, so the money you enter with is the money you have for the entire trip – that is if people accept it. We had a couple of bills that we just couldn’t get rid of because of slight bends or discolorations.

So we had to be cost conscious in a whole new way on this trip, which added an interesting dimension to the travel. Taking after my dad for a bit ;-), I ended up being the one who worried and worked over our budget again and again; in the end we had more than enough money, even with the imperfect bills. We stayed in budget hotels nearly everywhere we went and did what we could to keep costs down and our experiences were no less rich for spending less money.

The one place we did totally splurge was in Yangon, where we stayed in an incredible hotel. The Classique Inn was just gorgeous. Six elegant rooms in a quiet setting (north of the city center, so it’s a bit away from the action), run by a mother and daughter who live with their family in a house next door. The building, rooms and garden area were just beyond gorgeous and provided lots of inspiration for my dream house of the future. We paid less than USD 60 a night, a price which included really reliable in-room WiFi, high-quality breakfast in the gorgeous garden and most generously of all, tons of personal travel planning support from Kalya, the daughter. She gave us great suggestions, helped with logistics and let us monopolize her phone lines as we booked what ended up being a phenomenal trip around the country.

Foyer outside our bedroom leading to the ground floor 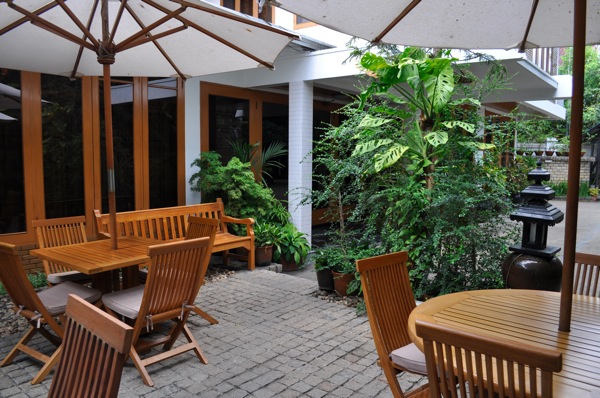