Inle Lake (pronounced In-lay) was another two night, one full day affair, resting and setting up logistics the day of arrival and then doing the heavy-duty sight-seeing the next day. We had a very early departure from Bagan, but our hotel (New Park – definitely recommendable for the price. Simple, clean, nice staff) was kind enough to make us breakfast ahead of their schedule and arrange for a ride to the airport. Still, even with a couple of cups of decent coffee in me (i.e. not three-in-one 😉 ), I was still feeling pretty bushed by the time we arrived at Heho airport.

Our next hotel, May Guest House, was a short walk away from the busier water-front area of Nyaungshwe (the town at the edge of Inle Lake and the launching point for many of the tourist activities) and was very welcoming. Upon arrival, the friendly owner set us up with two generous pots of coffee in the cute (but chilly in the morning!) garden breakfast area, and helped us to set up the customary long-tailed boat tour for the next day.

True Myanmar, despite the tourists

Inle Lake, like Bagan, is one of Myanmar’s primary tourist attractions. A shallow but good sized lake (about 44 square miles according to Wikipedia), it’s shores, tributaries and the lake itself are full picturesque stilt villages around and on the water and some prime opportunities to experience Burmese culture, from local crafts to specialized fishing techniques to crumbling temple ruins.

It’s possible to rent a canoe and paddle around certain areas, but the most effective and common way to get around is to hire a motor boat. There are lots of popular and programmed stops along the water where tourists will tend to end up coagulating. Some of it can feel a bit contrived, like the many artisan shops where you wander through with the other westerners, get a cup of green tea and a demonstration and then of course ample time to window shop and hopefully buy a souvenir or two. Even though it’s less than subtle, the traditional crafts were beautiful and the techniques demonstrated very interesting, and the people working in the shops were always genuinely friendly and not pushy at all to us. Additionally, as Roman pointed out, having these areas where tourists gathered did seem to preserve some real space and privacy for the lake’s residents.

This point aside, Inle Lake was just stunning and definitely worth the visit. We were out on the boat all day long. We witnessed the sun burning the blue-grey morning mist off the waters, revealing fishermen with their distinctive rowing technique, one leg wrapped around the oar, as well as set in a blaze of gold that splintered across the lake as we sped through crisp, cold air back to Nyaungshwe.

In between we got to visit temples, workshops, a heritage house that was also home to the relatively rare Burmese cat and to float through some absolutely gorgeous stilt villages and floating gardens. The homes on the water just took my breath away. Some of the neighborhoods had houses different from the traditional bamboo homes that I was enchanted by in Bhamo, these were more sturdy looking wood structures and often painted with primary reds or blue accents – something about them actually made me think a bit of an old New England fishing town. 🙂

I’ll let the pictures do the rest of the talking but I want to make sure I also remember a few things from our time in Naungshwe.
– Our first night when we were wandering trying to get our bearings, we ended up basically in someone’s back yard – they were so friendly and tried to be helpful despite the intrusion and language issues. It was cool to see their and other traditional houses, like the kind I’d admired from the boat up the Irrawaddy, up close. Some had no electricity and you could see lantern flames flickering inside and the family’s livestock hanging out under the house. Made me wonder how they kept warm as I was pretty chilly at night, even in our more sturdy hotel.
– The lovely restaurant with the friendly owner and his super cute little daughter who biked and laughed and played the whole time we were there. She was SO loved and so cute!
– Rescuing the stray kittens from the pack of street dogs. Wish I could have taken all three of them along with us! 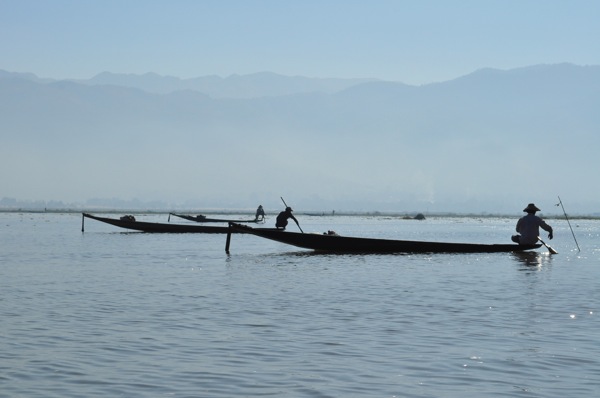 Fishermen in the morning. The boats they use are so shallow, from a distance sometimes it almost looks like they are standing on the water 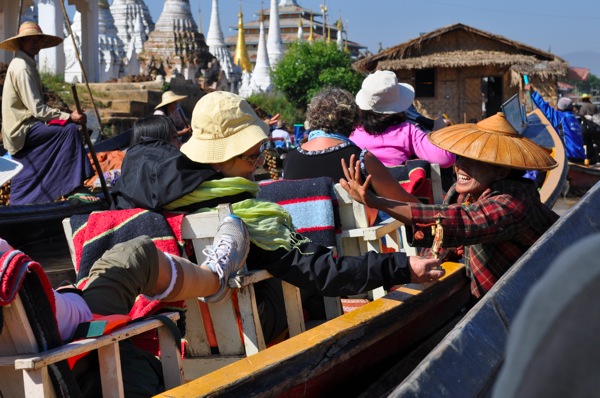 Traditional Burmese puppets at one of the first (and most touristy) shops we visited. They had some women from the long-neck tribe working there and everyone was taking photos of them like they were a zoo display – made me feel really uncomfortable. No other place we visited was like that at all thank goodness. The puppets were really lovely though.

Football by the water’s edge

The ruins outside the main temple were awesome – overgrown and silent. We were the only ones there and couldn’t help feeling a bit like Indian Jones. 🙂

Water jugs inside the temple

Amazingly beautiful houses! I love the electricity poles in the water. 🙂

House detail. So many of them had lovely verandas with pretty potted houseplants. I really like the simple but lovely stairs leading down to the water too.

Detail from one of the workshops we visited where people created thread from lotus plants and silk, died the materials and wove beautiful materials that became scarves, longyis, ties, shirts… Our tour guide at the shop was a chill young man and the place and goods were all gorgeous. If only we weren’t traveling light… In the photo: A woman works the wooden loom with her feet. 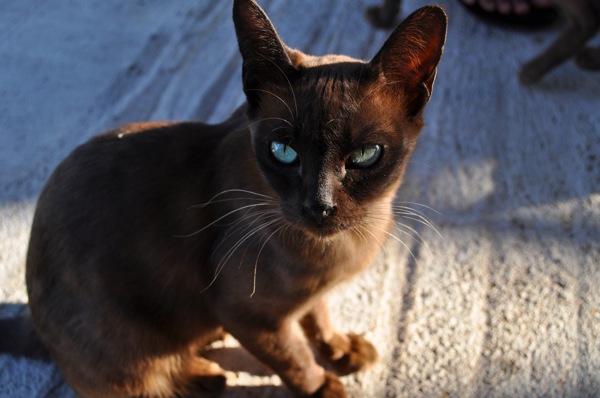 At the Inthar Heritage House, where they have a lovely home for dozens of cuddly Burmese cats. They are gorgeous animals and known for how affectionate they are. Their trademark is to jump up and hang out on people’s shoulders. I had one do this nearly as soon as we got into their enclosure and it was sweet and lovely – until the thing sneezed kitty snot all over me! 🙂 Our very sweet host at the House was mortified and helped clean me up. 🙂

The house itself was also amazing. A project of love for the woman who owns it, it was reconstructed from old wood and is full of her family memorabilia. Very gorgeous and another inspiration for my future dream home. 🙂

Stilts reflecting in the water

Our boat driver taking a break in the late afternoon sun

A woman trimming cheroots at the last workshop we visited

Homes, hill and lake in the afternoon sun 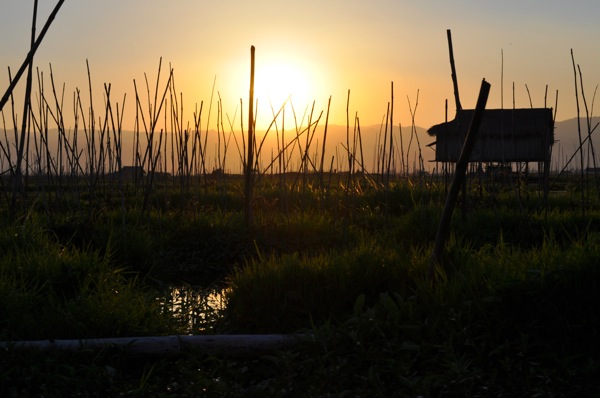 Sun setting beyond the floating gardens on our way back