I know not everyone is a fan of Bangkok. It has a bit of a reputation for being filthy, overcrowded and a bit sleazy, with neighborhoods dedicated to strip clubs and worse. There’s no question it is massive, and there’s plenty that I didn’t see (which may contribute to my high opinion), but I really enjoyed the city.

All together we ended up spending a large chunk of time there. We used it more for down time and transit, so I actually have very few photos from the weeks there (Bangkok was our first stop after Myanmar and my camera was so worn out after the three plus weeks there that I think it needed a break more than I did! 😉 ).

I’ll write more about our first visit to the city another time, but here are some more mental snapshots from the long weekend I had there on my own before coming to Laos, plus some of the few photos I did take.

Little things I want to remember:

The street musician with the tattooed face, pilot-style hat (close to the scalp, with ear flaps) and sunglasses who played beautiful music on a bamboo flute and looked more like a fantastical anime character than something of this world. 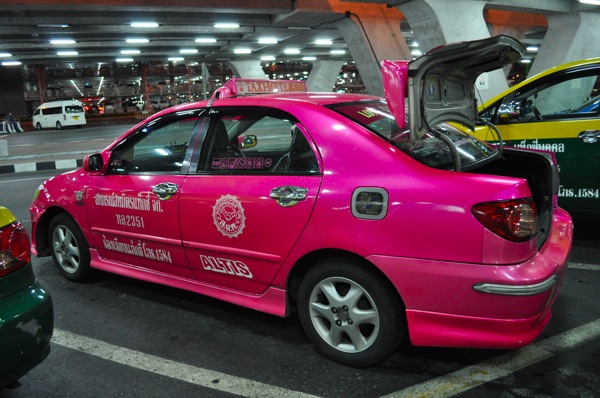 Catching a cab in my favorite hot pink from the airport 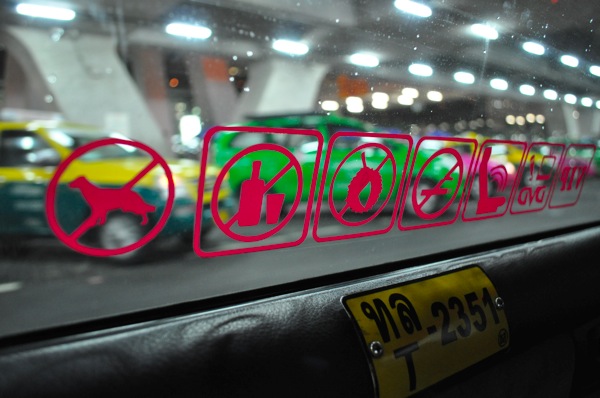 Labels on the cab window – including no drinking, no smoking and, in between those, no DURIAN

A street vendor in a massive bamboo hat pushing a cart with a bell tinkling from the corner, from which he sold mini balls of ice cream loaded with toppings and served on what distinctly resembled (but I hope was not!) hot dog buns. He was pretty popular so those must have been some really tasty buns…

Three well-fed rats who seemed to have won the rubbish jack pot because they were out in the light of day (usually we’ve only seen them after dark) happily weaving in and out of a card board box that must have been filled with a rubbish version of ambrosia.

One brave, or foolishly un-self-conscious, woman in a skin-tight, leopard print jumpsuit. Thai women have a knack at pulling off quirky fashion but even they have their limits…

The physical enjoyment of warming up in the extreme heat of the sunny afternoon reflecting up from the pavement after too much time in an overly air-conditioned store or restaurant – and the deliciousness of being engulfed in frosty cool inside air after a bit too much time out doors.

iPhone photo, not the best quality, but this monitor lizard is still impressive at somewhere between 4 and 5 feet long!

I found a yoga studio in the city that I really like. It’s called Yoga Elements and it’s a well run studio with teachers who really know their stuff.

The studio is fancier/more western than most of the ones I’ve been to so far on the trip. It’s on the 23rd floor of a corporate high rise, just down the street from the Chidlom Sky Train station, and has two large studios with floor to ceiling windows and some pretty great views of the city. The reception area is tastefully decorated and has new-age music playing. The studio provides mats and towels and complimentary tea, all of which are constantly refreshed by a sweet little Thai grandma who weaves between the students in the reception area in black-stockinged feet. All very professional.

Which is why I had to giggle when we were in the middle of a very-zen breathing exercise and a little gecko started chirping from some hidden corner on the ceiling. How he managed to find his way up tot he 23rd floor is beyond me, but he was a great reminder that despite how western the studio and even Bangkok sometimes felt to me, I am definitely in southeast Asia!