After the L O N G day of travel, we had finally arrived at our destination: Kashgar, or, to quote Lonely Planet “the westernmost metropolis of China’s New Frontier.” We were curious and exited for our first foray into mainland China, but more than anything we were totally exhausted and it was a relief to see our names on a piece of paper pressed up against the glass of the arrivals hall.

On the other side of the window, a young man in a moustache was waving enthusiastically at us. Enter Yusef, our character of a guide who was to be our companion for the next five days.

Compact and capricious, in looks he reminded me of the actor Jamel Debbouze. When hamming it up in his proficient but accented English he sounded to me a bit of Sacha Baron Cohen’s Borat. He shook our hands, introduced us to Hazid, our driver (whom he would refer to as “Driver” for the rest of the tour), ushered us into the waiting VW taxi that would be our ride in Xinjiang and proceeded to tell us about himself while we fought to stay awake during the drive to the hotel. 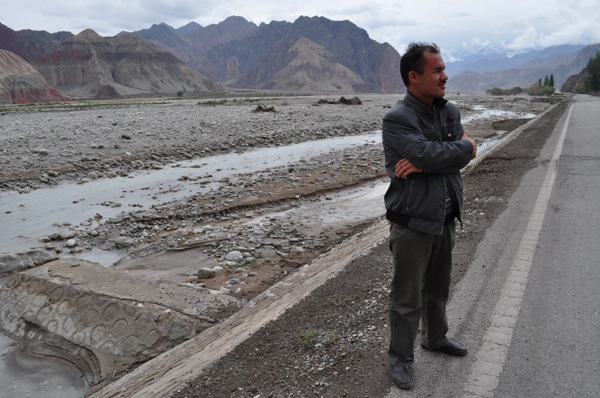 Yusef, demonstrating to Roman how to pose for photographs like a strong man

He is descended from a line of blacksmiths, which is why he is naturally strong and energetic and doesn’t even need tea or coffee in the morning. His 60-year-old father still works as a smith today.

He’d been in a love relationship for two years, but both he and his girlfriend have now gone on to marry the people their parents chose for them. The night we met him, he’d announced that he been married for 55 days; his new young wife was about 40 days pregnant.

I wasn’t sure if congratulations or consolations were in order. Indeed as we got to know him better Yusef seemed to be a person passionately caught between tradition and modernity, deploring and praising each in turn.

I can imagine he’s not the only young Uighur to feel this way, as the encroaching tides of Chinese and foreigners hold up glittering but unattainable visions of western lifestyles, prosperity, freedom, while rapidly eroding the long-established and clearly cherished Muslim way of life in the region.

Yusef definitely added color to our experiences in Xinjiang. He had an answer for every question – some more believable than others (for example, I’d never before heard the theory that Egypt was the cradle of Buddhism, and for some reason I found it tough to believe that it was the Uighurs who introduced chop sticks to China). 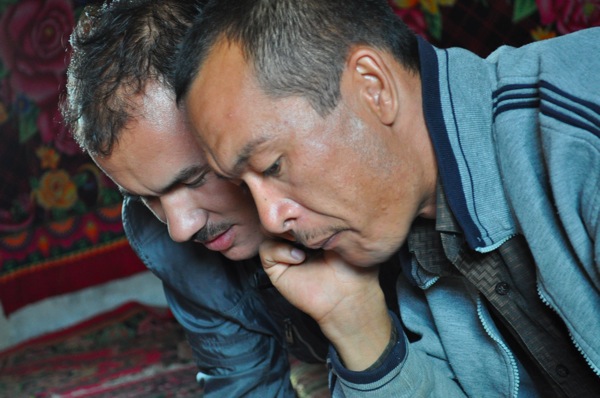 Yusef attempts to help Driver woo his girlfriend by singing love songs into the phone (much to Driver’s chagrin, I suspect)

He explained to us during our first morning on the road that Uighur is a musical language and during the journey he’d often break into song when the mood hit, which I loved and Roman hated. 🙂 He did have a wonderfully melodic voice whether he was singing regional folk classics or cheesy 1980’s love songs in English.

Some of the information I’ll share in my next Xinjiang posts will be courtesy of Yusef, so grains of salt may be required at times. Still, I loved and appreciate the added dimension of seeing Kashgar and the other places we visited through his eyes as well as my own.