I love me a good melting pot.

Visiting locations where dramatically different cultures, histories, languages or traditions have been thrown together (voluntarily or otherwise) and have stewed (sometimes at a pleasant simmer, sometimes a roiling boil) for long enough to produce something that still tastes of the original elements yet still is different, new and unique have been among my favorite experiences of the big trip.

India, with its exuberant jumble of Hindu, Muslim, Buddhist, Christian, Sikh temples, holy places and practitioners, with traditions of Jain, Zoroztrian, Judaism and Baha’i faiths thrown in for good measure.

Xinjiang, where historically disparate regions flowed into each other along the Silk Road. Xinjiang, today the province in China that over ten different “minority” groups call home, where you can walk down a street and see signage in four different scripts: Arabic, Chinese, Roman and Cyrillic.

Places like this are fascinating and captivating to me.

I didn’t know it before we decided to travel there as a respite from all the cool, grey weather we endured in China, but the Philippines has a cultural mix to rival the best of them.

Technically it’s a part of Southeast Asia, but it sure feels like unlike any place we traveled in that region. 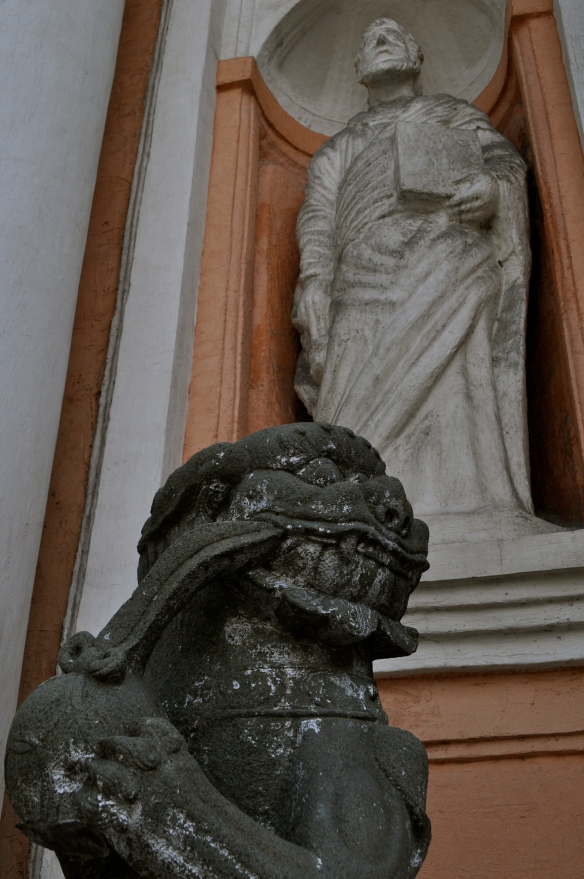 I suppose it’s understandable when you look at the major historical and cultural influences on the archipelago: Indigenous, Malay, Indonesian, Chinese, Spanish and American (of the United States persuasion). Comidienne Lisa Lampinelli lovingly described Filipinos as a “weird mixture… the Swiss Army knife of minorities.”

It’s a pretty eclectic mix and helps to make the Philippines and the Filipinos a country and a people like no other! (this site has some really interesting perspectives from Filipinos on the topic in case you want some extra reading: http://www.interaksyon.com/whats-a-filipino; this article in particular provides an interesting overview for folks who are less familiar with the country’s history)

Arriving in Manila felt like entering a completely different world after all the months we spent in Southeast Asia and China. The countries we had visited, while welcoming, always definitely had an air of the exotic and foreign for me. After adjusting to cultures so different from my own over all those months, it was a bit of a shock how familiar the Philippines felt by comparison while feeling at the same time equally exotic. 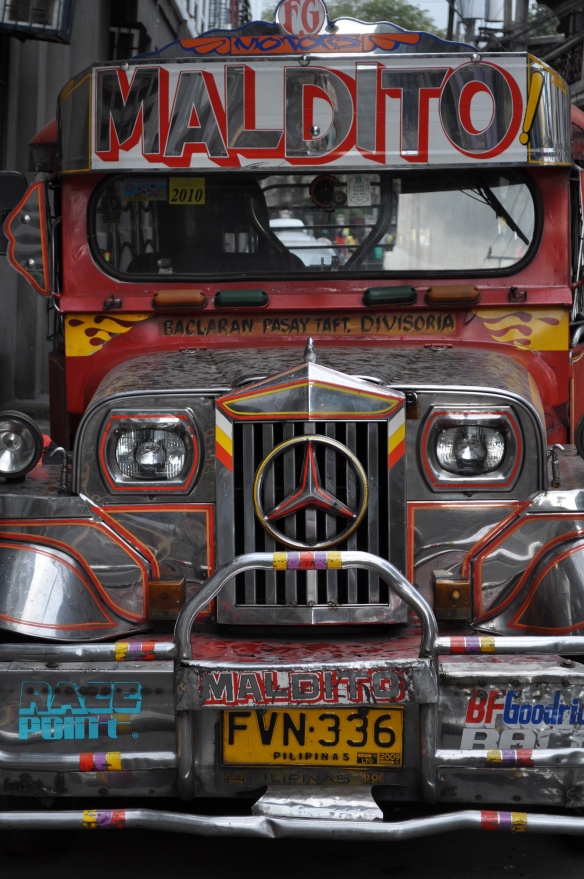 A jeepney – the ubiquitous form of public transport in Manila. “Maldito” is definitely Spanish as far as I’m aware

Over 170 languages are spoken across the islands, but we mostly got to hear Filipino spoken. To my naïve ears, the language called to mind Spanish with its cadence and lilt. Even though I couldn’t, I felt like I SHOULD understand at least some words here and there, like I do with Spanish. This was a unique feeling after being in completely unknown linguistic waters in all the other countries we’d visited. And when Filipinos spoke English with us, the accent was just as familiar – I felt like I could be listening to a speaker from somewhere in middle America.

The Philippines is also the second largest predominantly Catholic country in the world. 90% of the population is Catholic and it was trippy to see churches (distinctly Catholic AND Filipino at the same time) and their influence in such prominence after months of visiting Buddhist and Taoist temples and the occasional mosque. 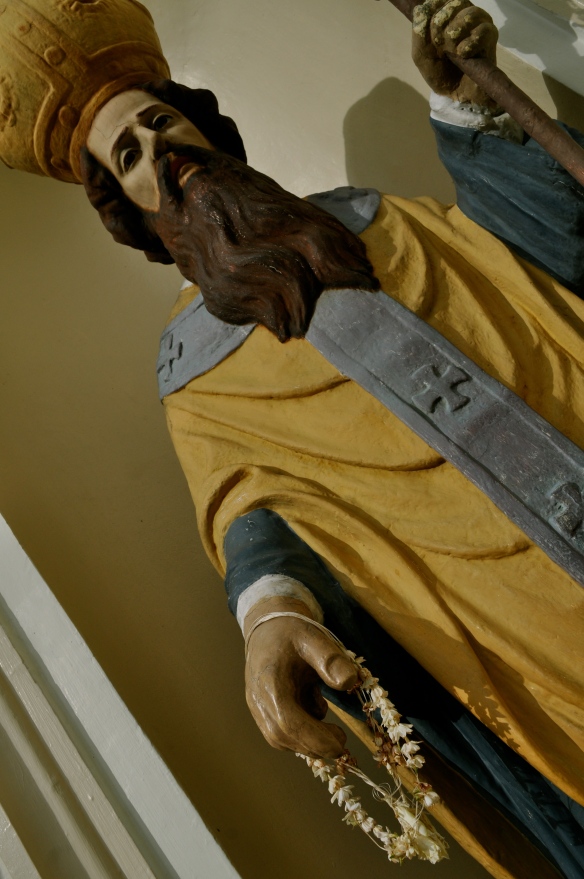 It was funny for me to see the flower garlands on the wrist of a Catholic saint – till then I’d only encountered these in Buddhist and Hindu places of worship.

And even though there was nothing I could quite put my finger on, somehow there was a good amount of America in the air (in the cities at least). I think Lonely Planet can explain it better than I:

“Describing the country is like trying to pick up a bar of soap in the bath: you may come close to grasping it, but it always seems to elude you. The Americans have something to do with it. Ruled by the United States for 45 years, the Philippines maintains a close spiritual bond with its former colonial master… The US legacy arguably looms even larger than that of Spain, the Philippine’s original colonisers who ruled the country for 350 years.”

And with all this influence from far-flung corners of the globe, the Philippines still have something intrinsically Asian about them.

We went there for the nature and the beaches. These were great, but what for me remains most vibrant in my memories of our time in Philippines is its odd-man-out-in-southeast-Asia essence and the tenacious, effervescent nature of its people.

We didn’t spend enough time – most of our interactions were just fleeting but as well, most of them involved a smile if not a laugh. I usually find it easy to fall in love with the people in a new country. It was easier than usual in the Philippines though, and I hope some day I can return and get to know this special place in greater depth. 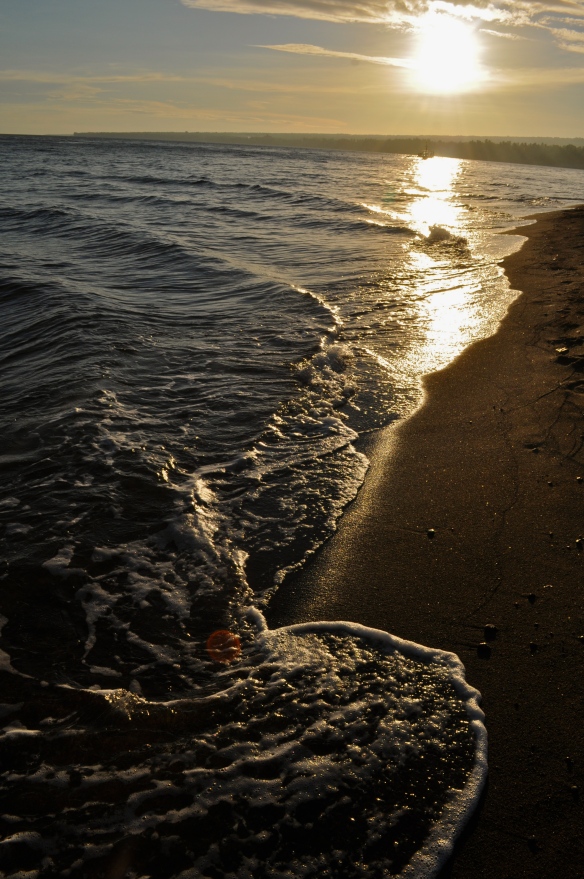