I wrote a little bit about Da Lat back when we were actually there.

It took some doing to get there as our original flight was canceled due to a severe storm in the area. It worked out for the best though as I got sick with some sort of flu and was better off in bed burning off my fever than traveling on the day our flight had been scheduled. If only we knew before we got to the airport that it had been canceled! 😉

The cab drive up the mountain from the airport to the city itself was … exhilarating! Our cab driver had a penchant for speed and passing anyone and everyone on the road. Luckily for us his speedometer was broken and the needle sat reassuringly at 0 km/hour – I don’t think I want to know how fast he was actually driving! 😉

Da Lat is known for its cheesiness and serves as a starting point for regional bike tours of the Central Highlands. From Lonely Planet: “Whether it’s the Eiffel Tower-shaped radio tower, the horse drawn carriages or the zealously colourful heart-shaped cut-outs at the Valley of Love, this is a town that takes romance very seriously – yea, unto the full extent of kitsch.”

We decided to take limited part in Da Lat’s standard offerings, doing a bit of sight seeing but mostly just reveling in the change of scenery from Saigon and from the wonderful mountain atmosphere and cooler weather. We also decided against doing a bike tour – since we’d pretty much only just gotten over being so waterlogged from our bike adventure in Laos and the weather in Vietnam wasn’t any drier! 😉

The town was a gorgeous place to walk around and explore though, with some interesting architecture (from the surreal, over-the-top Crazy House to the slightly forlorn but interesting colonial-era train station).

I was mostly indulging in fantasies about Switzerland though; with a cozy little restaurant where we went for breakfast transforming into a chalet-style Swiss café in the mountains, or the drink we had along the lake bringing me back to times spent by the Zürich See. (Have I mentioned how grateful I am for the wonderful time and life I had in Switzerland?? If not, I am doing so now! 🙂 ) 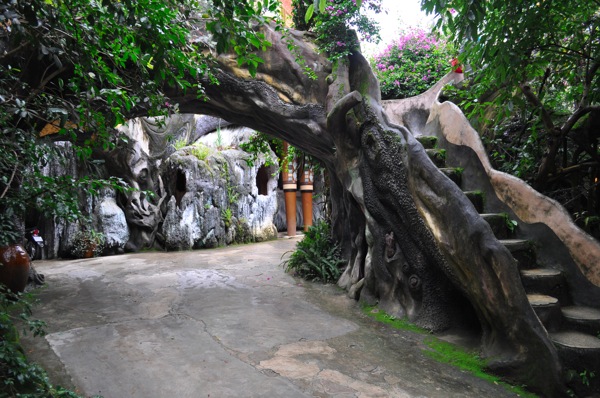 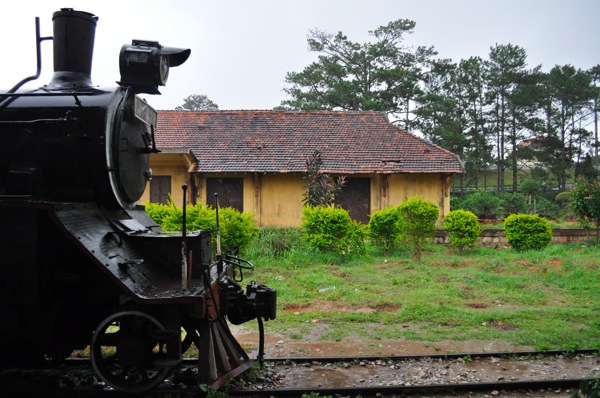 Locomotive at the train station

We hadn’t booked ahead, knowing that Da Lat is a tourist stop with plenty of hotels and that we weren’t in peak season. However, we were surprised to find that our first choices for hotels were all booked. We had expected things to be more like in Cambodia but throughout Vietnam it seemed that rooms the best hotels (as per Lonely Planet and TripAdvisor) were always being snapped up very quickly.

We ended up staying at Hotel Chau Au – Europa, which had run down but interesting and spacious rooms and a super nice owner (although his wife was less friendly!). We didn’t find any amazing food while were there, but I really enjoyed the ambience and the food was quite all right at Art Café. Our breakfast spot was Chocolate Café – pretty average but the place just had something about it that charmed me. Maybe it was the fake flowers in the window! 🙂

I didn’t take a ton of pictures during our stays in Dalat and Hoi An. I’ll write more about both these places, along with travel notes including Saigon, in a later post, but in the mean time here are some … Continue reading →

Feels like ages since my post about the phone incident. Since then, I’ve been sick – not sick as a dog but sick enough to have “lost” a couple of days to sleeping and a feverish, hazy, dreamy state of mind – and we’ve managed to leave Saigon after some tropical-storm induced travel delays. I have a whole bunch to write and post about our last stop in  Siem Reap and Angkor but I want to quickly check in with where we are and where we’re going.

So far Vietnam has definitely thrown a few curve balls our way, and while we’ve been mostly able to laugh or get philosophical about them, still it’s feeling good to have some movement. We are now in Da Lat, which is a quirky, kitschy mountain city north of Saigon. It’s definitely very Vietnamese, very Asian, but there are little things about it that make us think very distinctly of Switzerland, which had been oddly wonderful and comforting. The elevation and the sometimes blustery, cool weather, some of the architecture, the hilly streets.

Walking around to find a place for breakfast yesterday, the streets were wet from one of the frequent rain showers, the air was cool and fresh and we were bundled up against it – Roman said it almost felt like being on ski holiday. 🙂 It’s also the first place we’ve caught some occasional, wonderful bursts of sunshine – also like being up in the Alps during the winter. The sound of running water (from a roof after the rain or of a fountain in a cafe) keep making me reflexively think of melting snow at the start of spring – a funny feeling since we haven’t come close to seeing snow since I glimpsed some on distant peaks from McLeod Ganj back in September. I’m loving it though, and my heart is warming on residual affection for my dear old Switzerland.

We’ve gotten a sufficient taste of the place and movement is still feeling good for us though, so we’re leaving today for our next stop. Hoi An is a town that is also a UNESCO World Heritage Site, meant to be a tremendous tourist trap, but also a tremendously beautiful tourist trap. We’ll see how it treats us. 🙂 Hopefully the WiFi will be more consistent and I can catch up on Cambodia while we’re there. 🙂

Where are we now?